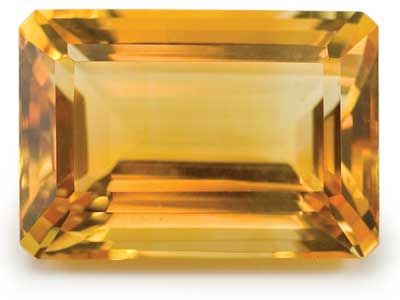 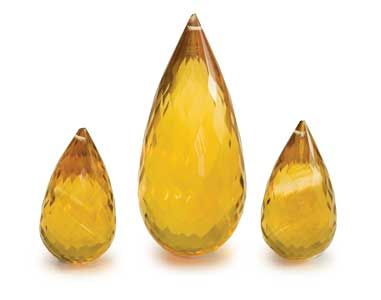 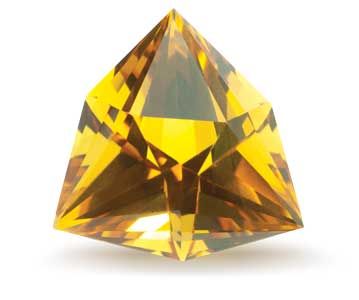 Fine yellow to golden yellow quartz is known as Citrine, and the natural, untreated material is quite rare and rather expensive. Much of what is sold throughout the world as citrine is actually heat-treated amethyst. The bright, sunny colour is often used as jewellery to brighten up the winter wardrobe in Europe, and is an extremely popular stone in Asia.

Citrine is considered an alternative birthstone for November. Golden topaz, is the traditional birthstone but citrine offers a more affordable alternative. The citrine is also traditionally the gemstone used to celebrate the 13th anniversary.

Citrine is the rich yellow variety of the gemstone quartz.  The name citrine comes from the French word citron, which means lemon. Natural citrine is quite rare, with most commercial supplies coming from heat treated amethyst. Citrine is often confused with it's much rarer look alike, Golden Topaz, and was in the past known by the misnomers of topaz quartz, or Madeira or Spanish topaz. The history of the two gems are closely interwoven because of this similar appearance.

As with any gemstone, citrine quality varies from the very high to the very low. The stronger colours tend to command more per carat than lighter stones.

Heat – Almost all citrine is heat treated. Untreated stones that are also bright and clean are highly prized and always cost more than a heated stone of similar appearance.

Hailed as a stone promoting success and prosperity, the citrine has long been known as the ‘Success Stone’ or the ‘Merchant Stone’. Keeping a citrine in the cashbox or register of a business, or the pocket of a salesman, is said to increase cash flow and encourage affluence.

As a variety of quartz, citrine is fairly resilient and suitable for normal wear, while being slightly brittle. Care should be taken not to knock the stone, as it may chip, particularly along facet edges and the girdle. Use judgement before cleaning in an ultrasonic cleaner.